Hello all! Time simply seems to be racing by, and it's September now.

It's proven to be quite a busy month, but before we get to the OSAS update, there's something else I'd like to address:

As some of you may know, VN Game Den is a visual novel news publication site, run by VN devs, that is one of the few places online where VNs are given public coverage! In fact, they reviewed our very first demo back in 2020.

They have put out countless articles and livestreams covering indie visual novels like Of Sense and Soul over the past two years, but they need funds to resume operations and compensate contributors, as is their standard.

If they can't reach their monthly goal of 1000USD/month, they will need to close down--and 98% of that goes directly to paying their staff. As of the writing of this post, they're 69% of the way to meeting that goal. So close, yet so far!

Please support them at patreon.com/vngameden if you're able to! You can also share their posts and stay up to date with the latest VN news on their Twitter @vngameden.

For one-time donations, you can visit their Ko-Fi, but Patreon is preferred for the continuation of site operations. 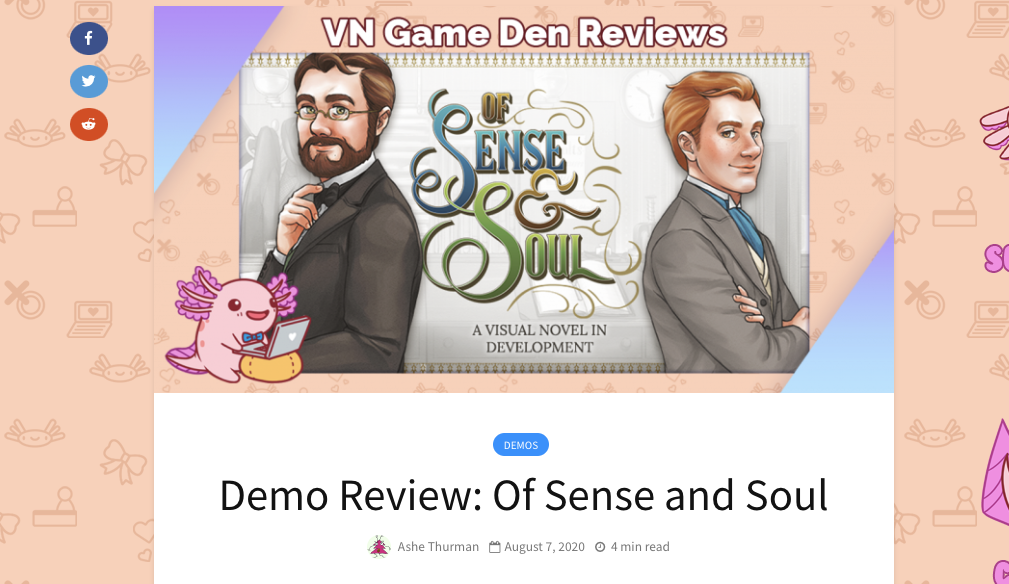 Over the course of August and first half of September since our last update, here's what went on at OSAS HQ! 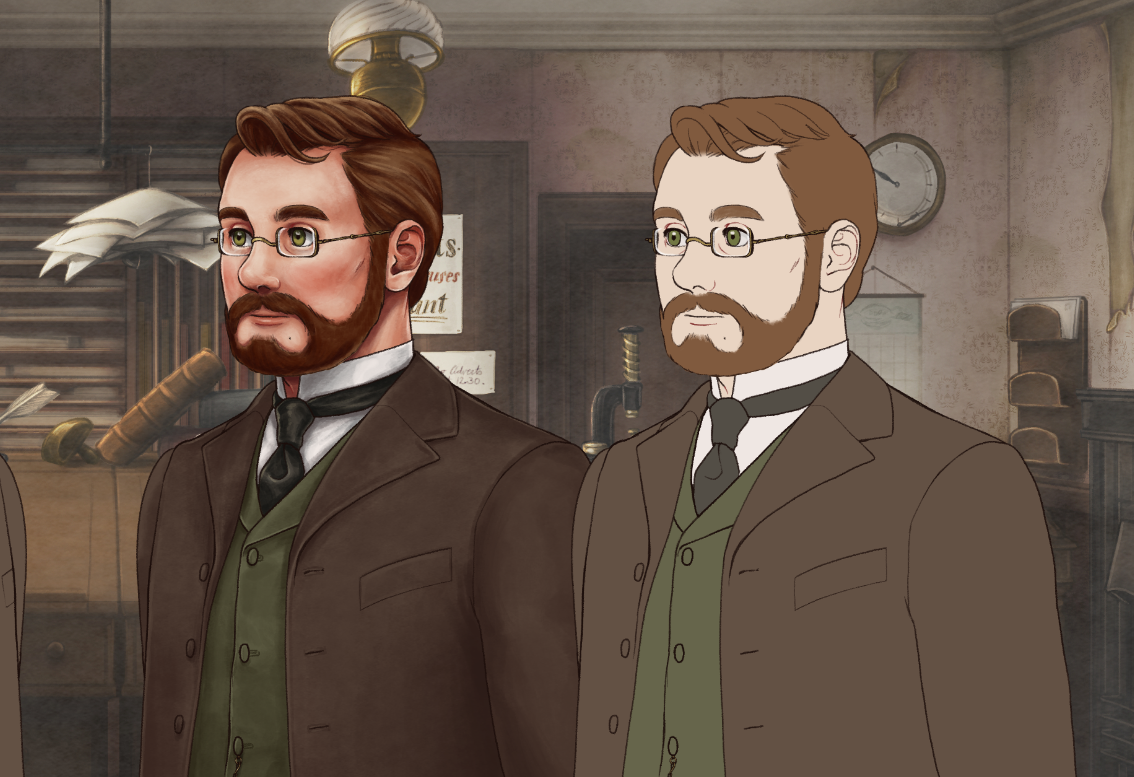 There was a lot of progress made in all areas of production this month! It's been rewarding to have a more tangible grasp on how the game will turn out, from art to music to writing to gameplay!

With backgrounds on the go from other artists and music in progress from our composer, I've taken on a larger role in writing for OSAS: given that Hugo and Seamus' routes contain repetitive scenes, AKA and I have decided that for those scenes, I will be writing one version of events and AKA will be handling the other. This will help us bounce ideas off one another without needing to rehash the same events twice!

Overall, I'm quite happy with the level of productivity we've accomplished this month! It's very rewarding to see things come together so well.

As for the colouring style: up until now, I've been using separately picked colours to shade items like clothing, which means my colour palette is very long and difficult to sort through. I would have a highlight, base, midtone, and shadow colour for individual items such as Hugo's jacket or waistcoat, which was very inefficient.

This month, I experimented with using layer colour and sub-colour settings to create a shading technique for clothing, because that has the most varied colour palette in the game. What I landed upon was using a cooler, eggplant-leaning colour for the deepest tones, then a warmer pink-beige for midtones. The result, as you can see below, is quite natural feeling!

Here's a demonstration of the colouring technique using layer and sub-colour settings, multiplied over top of a base colour. There is also a light texture applied to the base colour so that less effort is required to achieve the look I want. 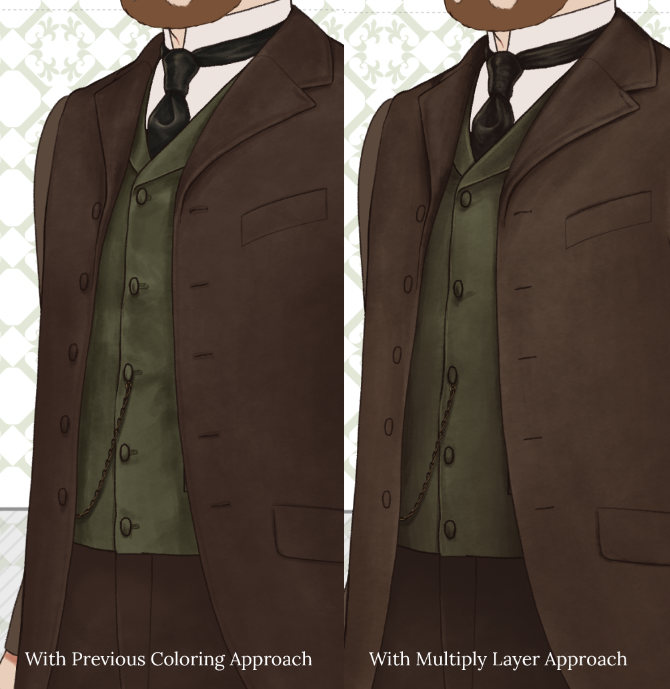 What this approach means is that instead of picking individual swatches for clothes, I can use black and gray to shade everything--the multiply layer and colour settings do the rest of the work! I will be able to reuse the same shading layer for different base tones of clothing.

One example of this is Hugo's "Event" outfit, where his waistcoat changes to a brown one but retains the same design. The change now is as simple as changing the base colour from green to brown!

I'd like to cover the colour story I've devised in a future post, when it's implemented more thoroughly--stay tuned!

With many different production areas being worked on concurrently and needing to liaise between different team members, I have sometimes had difficulty juggling all the balls at once. The ball that gets dropped first, however, is usually marketing.

Previously with marketing, I had focused too much on that and not enough on production, and naturally production now comes first. Keeping content behind Patreon access is also difficult if I'm meant to be posting publicly as well, so I'm struggling to make sense of what is going where!

I think what will help me with that, until I can seek assistance with marketing, is making most of the posts on Patreon early access for the time-being. Full previews will still stay Patron-exclusive, but posting publicly accessible cropped previews should help with managing social media content! 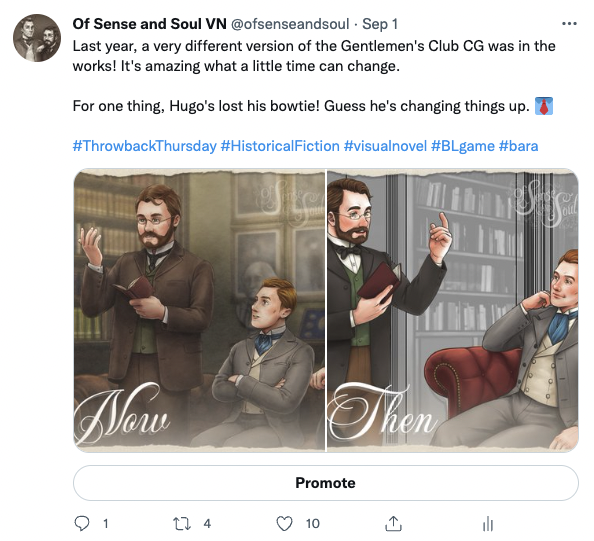 (I have enjoyed, however, looking back on how our game looked before this year versus how it now looks for social media content!

For the remainder of September and till our next dev update in October, we'd like to get more story--particularly, the story we need for the Extended Demo, which we're about 50% of the way done with-- squared away, as well as functioning placeholders for the main sprite assets required for it!

As mentioned above, VN Game Den is fundraising to continue their operations! Find them over at patreon.com/vngameden if you've got some change to spare and you'd like to support indie VN devs doing great work!